Sustainability is an important aspect of ZIRP. Whilst farmers who received chickens for small livestock received 25kg of chicken feed at the project outset, beneficiaries cannot sustain the use of commercial feed. Therefore ZIRP introduced the production of Black Soldier Flies (BSF) as cheap alternative protein source for feeding poultry to enhance production and productivity.

BSF larvae (maggots) are a tasty treat that can be fed to chickens alive as a supplement to their existing feed, to subsidize feed, or as a full replacement of the protein input in poultry feed.

In Buhera, farmers are using household kitchen waste like vegetables, sadza (pap) and manure to attract wild BSF. The BSF produce maggots that augment farmers’ chicken feed. The maggots also produce organic grass fertilizer (an alternative to chemical fertilizers), which they are using in their plots for increased crop productivity; “or selling as an additional value-added product.”

The BSF Hermetiaillucens is a common and widespread sanitary fly, which unlike houseflies produces high crude protein, fats and other essential amino acids. BSF larvae has a high oil content of 30%, which can substitute soya meal in poultry diets, becoming an important weapon in the arsenal of small-scale and communal farmers in Zimbabwe who were hit hard by Cyclone Idai and escalating input costs.

“BSF are easy to produce. I use locally available material to trap and reproduce the maggots. This has greatly reduced my feed costs. In addition, the quality of my indigenous chickens has greatly improved, increasing my household income,” says Chiedza Mashangana, a beneficiary of the BSF initiative.

BSF grows well on organic waste such as fresh manure (cattle, pig, goat and poultry), fruit and vegetable waste; all of which are readily available at farm level, making it easy and cheap for farmers to produce BSF larvae.

“When I started producing BSF, many farmers were skeptical about it, others resented the smell. Some just thought it was a bookish experiment from a university that would come to nothing. However, after witnessing the size of my eggs, and having a taste of my chickens, my household is now the center of BSF production,” said another beneficiary Shadreck Kombera, nicknamed the ‘Professor’ because of his knowledge on BSF production.

“As a lead farmer I was supposed to train 25 other farmers, but, I now train close to 45 farmers including some from other villages and wards,” said Shadreck.

Shadreck currently produces 3kgs of BSF larvae after every three weeks, from the naturally occurring wild BSF populations. At full capacity and using colonies from registered BSF farmers with healthy colonies, Shadreck is expected to produce 2 tonnes of BSF annually for feeding his poultry. 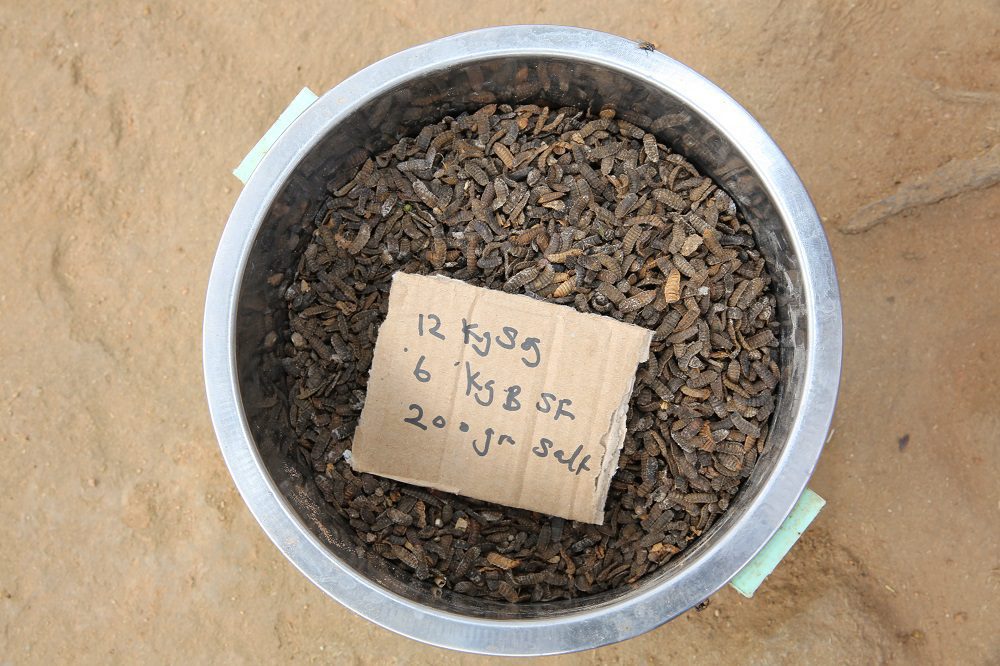 “BSF production has really transformed the way we produce chickens. We are not only producing for household food security but to also enhance household income.”

The commitment of the farmers in Buhera has been a critical factor in the success of the project. Further, the success is also attributed to the collaboration of partners under the “One Project, One Team” ZIRP approach.

BSF production in Buhera is led by FAO in partnership with Chinhoyi University of Technology (CUT) and in collaboration with LEAD TRUST. In partnership with CUT, FAO trained 22 lead farmers on setting up colonies, larva management, feed formulation and BSF feeding including infrastructure development. The Lead farmers are responsible for cascading trainings to other communal cluster farmers for better farming methods, including how to produce feed for their livestock.

Extension officers from ward 28 and 29 were also trained on BSF production for backstopping the famers in their respective areas.

“Farmers like Chiedza and Shadreck started harvesting BSF from the wild and constructing their love cages before input support from the project. They were even recycling disused dishes as feeding troughs. We are also learning from them as they have been able to improve several things through their continuous experimenting,” said Francis, an extension officer.

FAO in Zimbabwe, ZIRP project coordinator Brian Nhlema said that BSF production in Zimbabwe was still in its infancy as compared with similar projects in Kenya. He however highlighted that with technical support BSF production could be key in transforming livelihoods of rural communities.

“Commercial chicken feed is made mainly from soya bean, a rich source of the protein that chickens need to grow. However, soya beans do not thrive in Buhera because the area is dry. The beauty of the black soldier fly it thrives on organic waste streams, which are generated at farm level. With the right technical support, the rural farmers can commercialize BSF production,” asserted Brian.