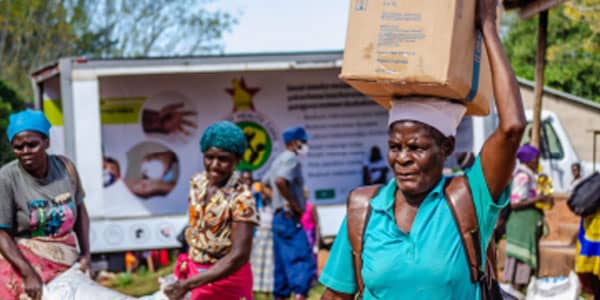 Cyclone Idai struck Zimbabwe in March 2019, affecting more than 270,000 people. The storm and subsequent flooding and landslides left hundreds of people dead and many others missing. Agriculture and infrastructure all suffered heavy impacts; many people lost their homes and livelihoods. The Chimanimani and Chipinge Districts of Manicaland Province were hardest hit.

Even before the cyclone hit, the food security situation was severe in Chimanimani and Chipinge. According to the January 2019 IPC analysis, which classifies food security according to phases, about 30% of the district population in Chimanimani and Chipinge were estimated to be in IPC phase 3 (Crisis) and 10% or 32,000 people were classified to be experiencing IPC phase 4 food security outcomes phase 4 (Emergency). This population is mainly concentrated in the valley where livelihood options are poor. WFP provides the affected communities with essential food assistance.

In the aftermath of Cyclone Idai, WFP responded instantaneously. The first phase consisted of an initial rapid response that supplied 56,000 of the affected people with 90-day nutrition-sensitive food assistance in the form of specialised nutritious foods mainly targeted at the most vulnerable including children under-five and pregnant and lactating women. In phase 2, WFP and its partners provided a full food basket to 220,000 individuals in the affected districts and supported recovery activities, with phase 3 providing recovery support to another 15,000 people.

The 2018/2019 agricultural season was characterized by the late onset of rain in most parts of the country, pro-longed mid-season dry spells in mainly in the southern and western parts of the country. To compound this situation, the country was affected by cyclone Idai in March 2019 which caused severe damages to crops and infrastructure, destroying the livelihoods of many in Manicaland and Masvingo provinces.

Chipo (loosely translated in Shona means gift) aged 46 said she has seen it all, and she never thought life could change in a single night. “My house was destroyed during the cyclone, I lost all my clothes and blankets. I am a mother of six, and what pains me most is that the cyclone also washed away my field. I was so devastated because this was our livelihood, and we all depended on it. To lose everything like that in one night is too much to bear,’’ she said.

“Before the Cyclone I was a smallholder farmer; I grew sorghum and maize to feed my family. We didn’t have much, but we managed to harvest something and feed the family. The cyclone changed my life; my husband is chronically ill and my medication was also washed away by the cyclone. For survival I had to sell baobab fruits,” said Chipo.

Chipo and her community have been receiving support under ZIRP to help them overcome the challenges they have been facing through the Lean Season Assistance (LSA) programme by WFP.

“The support we are receiving came at the right time, as there was nowhere to turn to. Last year there was a cyclone, this year we are experiencing drought coupled with economic challenges. Do you know our children were fainting with hunger before they even reached school? We say our children are the future but if the future is collapsing in front of our own eyes before they are old enough what does the future hold? We are grateful for this food assistance, as it goes a long way. I am a mother and there is nothing more painful than to see your kids going to bed on an empty stomach. I brought them to this world so it is my duty to make sure they have food. However, before this intervention I felt I had failed,” added Chipo as she sobbed looking away.

Chipo has managed to pick up the pieces and move on with her life, like most of the people in her community thanks to the support of the World Food Programme (WFP) through the Zimbabwe Idai Recovery Project (ZIRP).

The Lean Season Assistance programme has made great progress in improving access to food for households who are experiencing food shortages during this lean season period. Food consumption scores have improved significantly at the household level, while a greater proportion of women consumed the recommended number of food groups. WFP ensures that recipients of food assistance can access a diet that is rich in protein, vitamins, minerals as well as  iron.

Together with its implementing partners World Vision International and GOAL, WFP has provided food assistance to more than 200,000 people in Chimanimani and Chipinge.