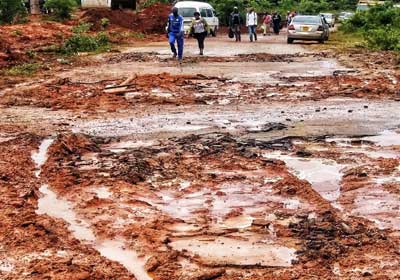 The flooding caused by the Tropical Cyclone Idai weather system since 15 March caused destruction in Zimbabwe.

Rains have begun to dissipate in Manicaland and Masvingo provinces.
UNDP, as part of the joint UN team, immediately deployed to the affected areas to assess the extent of the devastation on people, livelihoods and infrastructure. The rapid assessment report will inform immediate response and rapid deployment of assistance and start early recovery work.
Updates:

Preliminary findings show that an estimated 250,000 people have been impacted.  It is also estimated 37 per cent (121,000 people) of the rural population in Chipinge district require urgent food assistance, while 77 per cent (114,000 people) are in need of food assistance in Chimanimani. At least 35,000 households – with over 120,000 women and over 60,000 children – are in urgent need of protection interventions in the two assessed districts (Chimanimani and Chipinge). An estimated additional 100,000 children are in need of welfare and civil registration services in nine districts.
Infrastructure has sustained significant damage. Some 95 per cent of the road networks in the affected areas have been damaged.  In addition, some 48 schools, 18 water points and 10 bridges have been damaged or destroyed.   Manyera dam wall in Vumba has reportedly weakened and increased community awareness is required. At least 200 poles have been washed away along the Chipinge to Chimanimani electricity line, leaving many people without power.
Search and rescue operations are continuing, with active operations still underway. Efforts are being made to recover bodies that were trapped under mudslides and rubble. However, progress has been slow due to the difficult weather conditions. Command centres have been established for people rescued.
22 March 2019
Confirmed deaths have risen to 139 people, with 189 still missing. At least 16,0000 households have been displaced. Access to clean water remains a challenge. 1,100 shelters for 3,209 households at Tongogara Refugee camp have been completely or partially destroyed..
Helicopter rescue operations contnue and police sub-aqua units have deployed. Relief trucks carrying shelter, non-food items and WASH supplies have arrived and distribution is underway. Read full article here