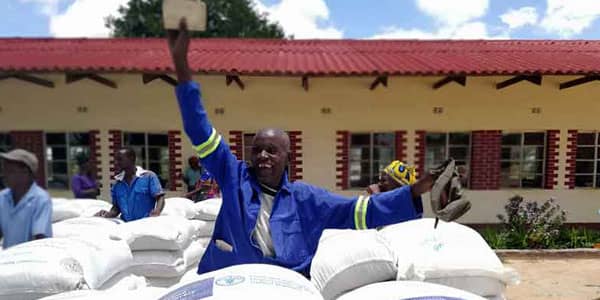 Each beneficiary received a total of 805 kg of stock

for their breeding cattle and 733 of the

Tropical Cyclone Idai made landfall in Zimbabwe on 15 March 2019, creating extreme weather with heavy rains. The cyclone caused substantial flooding, leaving 270,000 people in need of humanitarian assistance. As part of the emergency recovery after Cyclone Idai, the World Bank Group unveiled US$72 million to address early and medium-term resilient disaster recovery needs of cyclone-affected people. This intervention is called the Zimbabwe Idai Recovery Project (ZIRP), and is managed by the United Nations Office for Project Services (UNOPS). ZIRP brings together several UN agencies with expertise in different fields working through an integrated approach for greater impact. The agencies working under ZIRP are FAO, IOM, UNICEF, UNOPS, WFP and WHO. FAO is working on restoration of crop and livestock production as well as restoring communal irrigation schemes to support agrarian livelihoods.

For Dizzy Maphosa, a 34-year-old woman from Nyerere village in Chipinge, Cyclone Idai left a trail of destruction after an already difficult farming season. For two consecutive years, 2018 and 2019, there was poor rainfall. By September 2019 there were no pastures left, leaving Dizzy and her family fearing for the death of their livestock by starvation.

Chibuwe, where Dizzy lives with her family, is naturally hot and is one of the driest regions in the country. Dizzy says they could not just watch as their livestock succumbed: they tried many different ways to save the situation. “I used to go to our field to cut grass in order to make hay to feed the starving livestock. The trip to the field would take me one hour each way. Most of the time I would take three 50kg bags that would last two days, and I would have to make another long trip to the fields. I was also very fearful as we heard that livestock had been attacked by lions from the Save Valley Conservancy. My fear was that our cattle would one day stray into the conservancy in search of grazing land and fall prey to those beasts,” says Dizzy.

Supporting the most vulnerable

Through the ZIRP, FAO aims to restore livestock production of people affected by Cyclone Idai. A community-based participatory approach was used to select project beneficiaries. At the village level farmers took the lead in ranking and selecting each other according to vulnerability criteria which included: vulnerable livestock farmers affected by the cyclone, farmers with grazing areas affected by the cyclone, farmers owning 2-8 animals, farmers who lost some of their cattle during the cyclone, female-headed households, child-headed households, chronically ill people and people living with disabilities were prioritized.

Each beneficiary received a total of 750 kg of stock feed complemented by training on proper stock feed utilization. “In December, together with some of the villagers we managed to get assistance for our livestock. We received 15 bags of 50kg pen fattening feed for five herd of cattle. It was as if ZIRP had seen all our futile and desperate efforts of trying to save our herd of cattle. They came at the right time as we were slowly losing hope,” says Dizzy.

“Feeding cattle using the stock feed we received under ZIRP has brought about many changes to our cattle. We feared that we would not be able to get enough draught animal power, when the 2019 – 2020 farming season started as the cattle were so thin they would not be able to draw a plough. However, after getting the stock feed, we saw massive changes and those animals could easily draw a plough, something I had not imagined,” she adds.

Close to 3,000 animals benefited from the stock feed. This had immense benefits for the 1073 households targeted by the project. Some households saw an increase in herd size due to improved calving rates, increased milk production leading to improved nutrition, especially of the children under five and improved market prizes for the households who sold their cattle there by enhancing household income.